No additional justification for having "Batman" on DVD is necessary 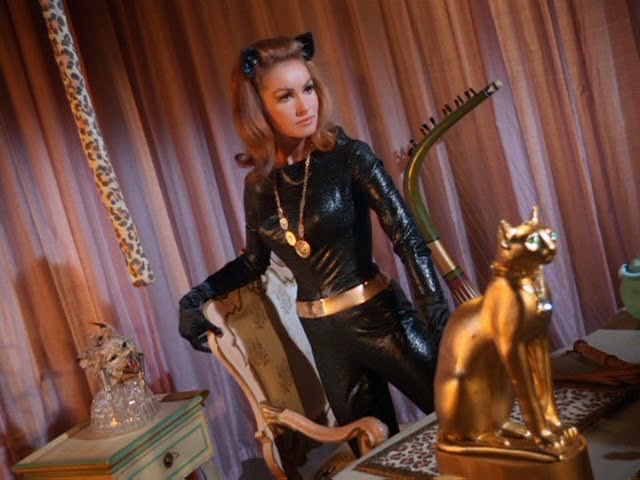 OK, I know what you're thinking: "Rick, Halloween was weeks ago. Why are you talking about 'It's the Great Pumpkin, Charlie Brown" in the middle of November?" Well, first, I finally make a new post after months on the sidelines, and you're gonna bust my chops over its timeliness?  Second, hey, don't worry about when Halloween is or was or whatever. This isn't a Halloween post. Oh, no, no, no. It's a THINK PIECE!

"Pumpkin" is one of the funniest of all the Peanuts animated specials, what with Linus' devotion to the mythical Halloween icon, Lucy yanking the football away from Charlie, and Charlie's goofy dance when he gets the invitation to the big party. By far the best moment in the special is the trick-or-treating sequence. Discussing this one with a friend recently, I started to consider it in a new light.

To summarize: The kids assemble for trick or treating, and Chuck shows up wearing a sheet riddled with holes, meekly explaining, "I had a little trouble with the scissors." (Another of the show's great and understated lines) Yes, our hero took arguably the most half-assed costume concept of all, the ghost--rivaled only by the "wear old clothes and call yourself a hobo" strategy--and botched it.

The Peanuts gang heads door to door, pausing after each house to compare its goodies. Each kid boasts of some great item until poor Charlie adds, "I got a rock."

Each time this the sequence occurs, the rhythm is perfect, and Charlie Brown's pathetic delivery is outstanding. It cracks me up.  But let's take a closer look. Why is Charlie getting a rock each time he goes to the door? Isn't this one of the most horrible things we've ever seen happen to a child?

It's amazing that every household in this neighborhood has the resources and energy to stock such a wide variety of treats in the first place, let alone to bother ensuring each child has a distinct prize. It's easy to find big variety packs of different candies nowadays, but during the actual event, nobody sizes up each child and attempts to match them with a distinct piece of candy. Instead, we either let the kids root around for something or we just drop a few pieces into their bags. Yet in "Pumpkin," each child comes away with a different treat.

We also know Charlie is the only one getting rocks. It's not even Pop Rocks or crack cocaine (at least that would have some resale value). We see them falling into the bag each time. Charlie's getting big ol' rocks. He can't eat them. He can't sell them. He's lucky his bag doesn't tear open each time one hits the bottom.

For years I assumed that it was just the Charlie-Browniest of luck that stuck him with a crummy deposit each time. Now I see it differently. I believe the parents are targeting Charlie and deliberately giving an awful "trick." The odds of this happening accidentally are infinitesimal.

So now the question is why is this happening? Is it because of the crappy costume? What kind of grown man or woman sees a kid wearing a crummy outfit and says, "Oh, that's weak. I'm gonna give that little SOB a rock"? These ones, apparently! Or--and this is even worse--do they give him rocks just because he's Charlie Brown?

See, I think that's the only explanation that makes sense, and it chills me. People don't keep rocks sitting around by their front door to hand out to trick-or-treaters. So this isn't a spontaneous reaction to seeing how Charlie bungled the ghost gear. What would happen if Charlie had a decent costume? Do you really think they would just hang onto the rocks and save them for next Halloween?

No, the logical conclusion is that all the adults got together and collected a bunch of rocks for the sole purpose of sticking it to Charlie Brown. This is one of the most egregious examples of collective sociopathy I've ever seen. Think about the effort it took to organize this kind of thing. But we laugh it off.  You know, I have yet to find one documented case of someone dropping an apple with a razor blade into a kid's bag, but our parents warned us of that when I was growing up. For 50-some years, grown-ups have been dumping actual rocks into a little kid's sack of candy, and nobody says anything.

So, assuming that they planned this before Charlie screwed up his sheet, they did this just because...why? Because he's a loser? It's not like Charlie is a bully, a thief, or a bad influence. The only thing he does that directly impacts these grown-ups' lives is give up home runs and make the local sandlot team look bad. He's just a kid who tries hard but messes things up. Again, he tries hard. These people should point to him as an example of fortitude, of ganas, of never giving up.

Instead they decide, nah, we don't like this loser, so we're going to make his life miserable. Once you realize this, it makes these specials a lot harder to watch. That "humorous" speech pattern all the adults have suddenly feels sinister. No matter how he tries to improve himself, Charlie is never going to succeed in this place. The adults will break him whenever he is on the verge of succeeding. If he ever gets a real date with that little red-haired girl, I have no doubt that the cabal that runs the community will not only ensure she meets an "accidental" demise, Walter White style, but they'll frame Charlie Brown for it.

They don't want a bunch of Charlie Browns. In fact, they probably don't even want a bunch of Linus Van Pelts. My guess: They want a neighborhood full of Shermys. In my opinion, Charlie Brown doesn't need psychiatric help. He needs to get the hell out of town.
Posted by Rick Brooks at Saturday, November 22, 2014 No comments: